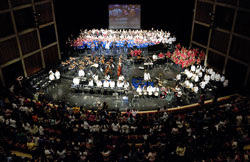 Hundreds of young musicians from Georges Vanier SS and Don Valley and Pleasant View Junior High Schools came together for the inaugural One World Arts Gala on June 7 at Georges Vanier to celebrate artistic creation as a force for positive change. The students are part of the One World Youth Arts Project, which recognizes the value of artistic creation and performance as an important medium for change in our world.

The students involved in the project create art that addresses the issues of equity, social justice and global connectivity, which enhances education and makes meaningful change possible. TDSB teacher/consultant Stephen Lashbrook, coordinator for the project says that the event and the project “transcend the aesthetic and show how art can reveal our humanity and be a force for good in our global community. The world needs more ‘music spirited’ people.”

Students and staff at the gala were joined by One World alumnus Mohanza ‘Obie’ Kelly. Obie is a local musician who is a graduate of the project and has gone on to a career in music (including a very successful Canadian Idol experience). He performed original music created in the One World Studios along with some popular R&B standards. The finale featured Obie singing “Lean On Me” accompanied by nearly all of the young musicians from the three participating schools – band, chorus, strings and the One World house band.

For student Amy Hsieh, the gala was a huge success and a great experience. “Music is so personal, so sharing it is an honour a pleasure and a great way to break down barriers, even the less obvious ones.” Hsieh will be going to university in the Fall of 2007 and will miss the students and staff involved in the project. “Between the One World classes, choir practices and performances I got to know people that I probably wouldn't have otherwise, and I enjoyed it all so much.”

The One World Vocal Group, coached by Sharon Backman, performed the national anthem at the Canadian Urban Institute’s (CUI) Urban Leadership Awards ceremony on June 14 at the Royal York Hotel. The students were thrilled to meet with guests and honourees such as Mayor David Miller, media icon Moses Znaimer, and president of CUI and former Mayor of Toronto David Crombie.

Along with the premier gala event and participation in the Urban Leadership Awards, the project celebrated the life and vision of Dr. Martin Luther King at the ‘Keeping the Dream Alive’ celebration in Hamilton. The One World Project is also associated with educational research projects at the University of Toronto, the Ontario Institute for Studies in Education and at Wilfrid Laurier University. One World has been presented at education conferences all over the world by associated graduate students at the University of Toronto, as part of their PhD preparations. Most recently Steve represented Canadian music educators at the prestigious "Tanglewood II International Symposium “Charting the Future,” a music symposium on music learning for the 21st century.