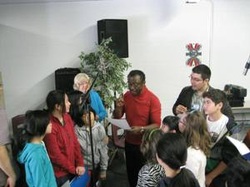 TDSB International Language Camp students record a song at Georges Vanier SS over the March break. During the March break, hundreds of students participated in a Continuing Education International Language March Break camp. Camps were held at three schools, Ryerson Community School, Dixon Grove JMS, and Georges Vanier SS. Students got to 'sample' a variety of languages and cultures, and with the help of student mentors hired through Focus on Youth, they engaged in a number of interesting and informative activities. Among a number of outstanding ventures, a group of elementary students at Georges Vanier rehearsed and recorded the song "We are the World" by Michael Jackson. They practiced the chorus in various languages (Cantonese, English, Korean, Mandarin, and Spanish), and under the choir direction of Betty May and the artistic direction of Ashley Ingram and the AISM Language Institute, produced the final song in the Georges Vanier SS One World Youth Arts Project's (OWYAP) Recording Studio in time for the afternoon show for the parents and the wider community! (click here to hear the song)

The students had a great learning experience. Our thanks to all the people involved, many who kindly volunteered their March break to support the camps, as well as the Friends of Community Schools and Full Service Schools for their financial support. 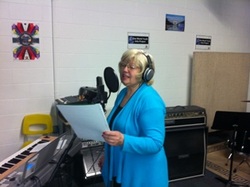 TDSB Language Camp students recorded at Georges Vanier SS During the March Break, several students from across the TDSB took part in a Continuing Education language camp at Georges Vanier Secondary School (GVSS). Among a number of outstanding activities (some led by GVSS students hired by the TDSB as language assistants) some elementary students rehearsed the chorus of the song “We are the World” by Michael Jackson, in various languages (Cantonese, English, Korean, Mandarin, and Spanish), under the choir direction of Betty May. On Friday morning, 15 elementary school students were recorded singing the English chorus of that song at the Georges Vanier SS One World Youth Arts Project’s (OWYAP) Recording Studio, under the artistic direction of Ashley Ingram and the AISM Language Institute, who produced the final song in time for the afternoon show! The kids had a great time during the recording and this was a wonderful example of collaboration between Georges Vanier SS, Continuing Education, OWYAP, and AISM. Thank you to all the people involved, many of whom gave up their break to support and make this a success!

Listen to "We are the World" (mp3 format)
Image Source: http://www.tdsb.on.ca/wwwdocuments/Director/images/we%20are%20the%20world.jpg